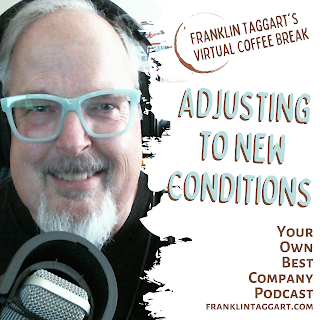 My son got his driver's license this morning and drove himself solo to school for the first time. We've been hearing all day that snow was coming, and there was a dusting by noon that didn't add any challenges. Even an hour before school got out, roads were clear, and all appeared to be well. In that last hour, the snow finally started to fall, and the roads covered over quickly and became very icy.

Bodhi had never driven on snow before this, so he was pretty nervous. He got to a place where he could pull into a parking lot and called us to ask what he should do. We talked over a couple of alternate routes, and he chose the one he felt the safest driving on and slowly made it the rest of the way home.

I think one of the best signs of intelligence is the ability to recognize when we need help and have the courage to ask for it. New conditions spring up all the time, and we often don't have any idea what to do when we're faced with situations we hadn't planned on.

Today I take a lesson from my kid to be smart enough to find a safe place to park, get on the phone, and ask for guidance from a more experienced resource. I also mention today's Firework Experience Workshop by Cat Stancik that I attended. It was a good example of resources entrepreneurs can turn to when they feel like they're spinning their wheels. Sign up for the next one at https://fireworkworkshop.com