Should I Worry About Artificial Intelligence Taking My Job? 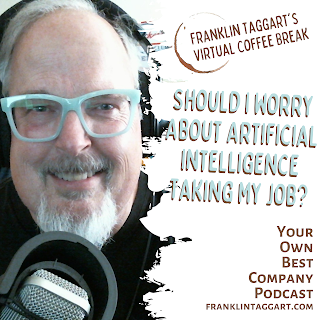 In recent months, I've had several conversations about artificial intelligence and the future of human labor. Most of these have had a central concern about being replaced by a computer or a machine. I'm not going to pretend like that won't or can't happen. It's the most likely scenario; humans have been evolving technology to replace our labor since the first tools were invented.

Every technological advance has had an impact on human labor, and we've had to adapt, learn, and find new ways to deliver value to each other as we've been equipped with better and more pervasive technology. Why should this new technological age be any different?

It is happening much more quickly than past advances, and the interconnectedness of the tech is more complex than any we've had before, but the stages we'll go through will be similar to ones we've had in the past.

An initial stage of resistance and grief at the losses that happen. The next stage is taking stock and identifying new opportunities made possible by the advances themselves. Shifting our means of exchange to accommodate economic impact. Ultimately innovating new ways of creating and delivering value to each other.

It may be that our focus will have to shift to loftier needs in Maslow's hierarchy. Maybe we'll usher in a new spiritual age as we won't have to spend as much - or any - time working for a living. There is so much that we don't know.

Worry or not, most human jobs will be able to be done by computers and machines soon. The challenges will be adapting and integrating this new reality into life as we don't yet know it.