Challenging Assumptions About What Audiences Want 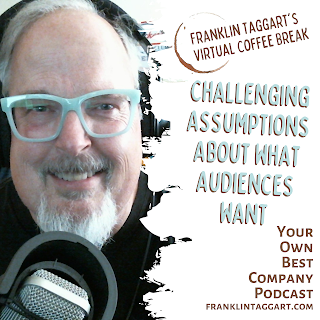 Every time I've tried to write a song based on what I think audiences will like, I've ended up hating the song. And the songs I'm surprised and delighted to have written tend to be the ones audiences like best.

Trying to determine what a group of people will like or respond to has been mostly a fool's errand. If I've tried to create a song, an event, or a presentation from the assumptions I make about what people want, it usually is a recipe for failure.

In this Coffee Break, I remember the time I lived in Nashville and attended writers' nights almost every night that I lived there. I was always amazed at how many writers tried to take radio hits and turn them into success formulas.

At that time, popular country songs were about tractors, trucks, and line dancing. So, many writers would try to latch onto those trends and themes  in their songs every night. Of all of the writers I met, only one had any success with one of these themes, and the reason his song got recorded and published was that his angle was completely unique and his craft was impeccable. On top of that, he had written a song that emotionally grabbed people from the first line. We were surprised and delighted, even though he'd started with a worn-out theme.

I think we need to challenge the assumption that something audiences find popular will have duplicate success when others use it. And yes, we see formulaic processes in every creative industry, but those who stand out find ways to surprise and delight despite the formulas.

I also ponder that we may not be creating for a contemporary audience but a future one. I wonder if Leonardo, Michaelangelo, and Van Gogh would be surprised that people are still amazed by their work years, decades, and centuries after they left the scene? These videos may not find a resonant audience in my lifetime, but maybe a future generation will find something they need here.

We never know for sure.