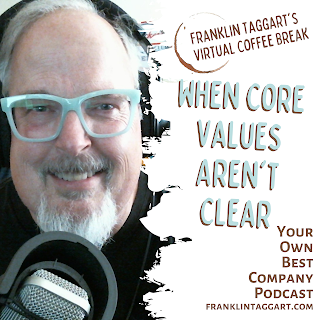 I was talking with a client yesterday about her feeling about not knowing what is next for her and her art business. She's had a few very successful years but has started to experience a slowing down and a level of dissatisfaction with the work she's doing now that suggests she's ready for a new level of development both as a creator and an entrepreneur.

It's tempting at times like this to try to restructure what you're already doing, but I had another direction in mind. I asked her to tell me her core values. As she talked, it became clear to both of us that her values weren't clear to her and that the words she used to talk about her values were more used to impress other people than to represent who she really is.

When we took the time to identify and articulate her values more clearly, she started to see that her dissatisfaction was coming from doing work that wasn't in alignment with her values. This gave us a much more solid starting place to work on envisioning her next direction.

Finding your core values may be easier than you think. We don't need a weekend retreat to get it done. Most of them will be so obvious that you'll say 'Duh' when you see them. But making them as clear and concise as possible will have a multitude of benefits as you go about your planning and strategizing.

Listen to the ideas in the video and then schedule a free Best Next Step coaching session at https://bit.ly/BestNextStepCall, and we can have you unstuck in an hour.