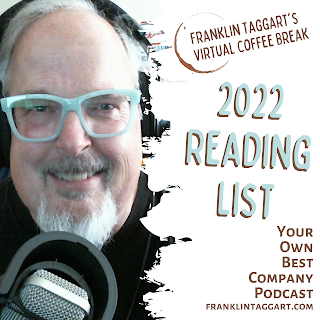 While I made the commitment to consume less content in 2022, I managed to read more books this year than I've read any other year of my life. A couple of reasons for that are that a friend of mine and I started off the year with a discussion of It's Not Your Money, by Tosha Silver and then decided to keep the discussions and books going after we'd finished. Additionally, I've become an Audible true believer. I've read more fiction this year than ever and it's mostly because I can listen while driving, walking the dog, washing dishes, and in quiet moments with earbuds. The list is long this year.

I'm sharing Amazon Associate links if you think you'd like to read any of these. Your clicks result in my commissions, so thanks!

It's Not Your Money, by Tosha Silver This one was on my list last year, but I have a feeling I'll revisit it yearly. Great spiritual perspective on money and some simple practices to positively shift our money experiences.

The Untethered Soul, The Journey Beyond Yourself, by Michael Singer I liked it, but it didn't have the same impact that The Surrender Experiment: My Journey into Life's Perfection did.

Life and Teaching of the Masters of the Far East, Volume 1, by Baird T. Spalding I would only recommend this one if you're a hardcore fan of dense metaphysical reading.

Real: The Inside-Out Guide To Being Yourself, by Clare Dimond Clare Dimond is a teacher and author more people should know.

Bittersweet: How Sorrow and Longing Make Us Whole by Susan Cain. Safe to say this one is probably at the top of our list to recommend.

The Art of Gathering: How We Meet and Why It Matters by Priya Parker. We wondered if there would be any updates to this book after being influenced by quarantines and social distancing. Still a wonderful book for people who love bringing groups together.

Originals: How Non-Conformists Move the World, by Adam Grant  I've had this book on my list to read for a few years. The discussion was the impetus that made it finally happen. I follow Adam Grant on social media and love the insights he shares. I would love to see a separate edition of this book that wasn't directed to corporate and organizational leaders. Still, a lot to learn and enjoy here.

More Non-Fiction I Read On My Own

Angels and Earthworms, by Lorraine Segal I met Lorraine in an online networking mixer this year and enjoyed our conversation. Her memoir is an adventurous story that I found inspiring and humorous, even in the midst of some painful challenges and losses.

Kingdom of Nauvoo: The Rise and Fall of a Religious Empire on the American Frontier, by Benjamin E. Park As a former Mormon, stories of the city of Nauvoo, Illinois are as familiar to me as Grimm's Fairy Tales. My Great, Great Grandfather and his wives were early followers of Joseph Smith and were residents of Nauvoo before eventually settling in Utah with Brigham Young. This is one of the most balanced accounts of Nauvoo and early Mormon history I've read.

Quiet Marketing: A Calm, Minimal Approach to Business and Online Visibility for Highly Sensitive Solopreneurs, by Danielle Gardner I heard a talk Dani gave for Tad Hargrave's group and was so impressed. She was my guest on Your Own Best Company twice after I read the book.

Creative Quest, by Ahmir "Questlove" Thompson this is one of the few non-fiction books I've read on Audible but I'm glad I did. Questlove has emerged as one of my favorite cultural heroes of the past twenty years. He reads his own book here and his enthusiasm and inspiration are infectious. If you haven't watched his award-worthy documentary, Summer of Soul yet, check it out.

Word After Word, by Joseph Bennett this is a beautiful collection of poetry by my friend Joseph written during the quarantine in 2020 and 2021.

M Train, by Patti Smith for my money, Patti Smith is the greatest storyteller of my lifetime.

Cloud Cuckoo Land, and All the Light We Cannot See, by Anthony Doerr both brilliant. Cloud Cuckoo took time to find a rhythm, but once it did, I was blown away.

While Justice Sleeps, by Stacey Abrams intriguing story from the person I am hoping will be given the political shot she's been robbed of twice. I recognized many of the DC settings from my time there.

A Man Called Ove, by Fredrik Backman This one broke my heart in all the ways.

If Beale Street Could Talk, by James Baldwin I can only handle one James Baldwin book a year. I haven't seen the movie, and I'm reluctant to because the book was just that good.

I read a few classics this year just for the reminder that newer isn't necessarily better.

The Return of the Native, by Thomas Hardy

The Old Man and the Sea, by Ernest Hemingway

Dave Eggers made me question the cost of being connected to technology all the time with two novels, The Circle, and The Every.

I don't have any idea how I found this book, but Lord of All Things, by Andreas Eschbach was one of my surprise favorites.

The Lincoln Highway, by Amor Towles was a different experience than I expected after being so enthralled by A Gentleman In Moscow, but it was a superbly written story.

After seeing the series, Turn: Washington's Spies, I had to read the book by Alexander Rose. This is one of my favorite slices of American history.

After Salman Rushdie was violently attacked in answer to a really old and stupid fatwa, I finally read The Satanic Verses. I can understand why a religious fetishist would be upset. It takes on every sacred cow in the book, and not only the Quran. It's also a pretty surrealistic story that I ended up savoring.

When Joan Didion died late in 2021 I was reminded of how much I loved Slouching Towards Bethlehem. I read it again after seeing the documentary The Center Will Not Hold, which was directed by her nephew Griffin Dunne. The book hit me harder at 60 than it did at 25.

An author I worked with recommended the book The Searcher, by Tana French. This was a brilliant story set in Ireland about an ex-Chicago cop who retired to the Irish countryside and gets drawn back into detective work.

I took another visit to Neil Gaiman Camp and read Neverwhere, and The Graveyard. Neverwhere is a unique read every time. I hadn't been familiar with The Graveyard because it was always peddled as a YA novel, but I loved it.

I rounded out my fiction reading with some late-coming attention to two Wyoming authors, Craig Johnson and C.J. Box. I didn't catch Longmire fever until I heard George Guidall reading the series. I listened to nine of them this year. Guidall actually sounds like one of the Wyoming sheriffs I knew when I grew up there. It took me a while to get on the Longmire TV series bandwagon because Robert Taylor is still too young and good-looking. After I read the nine Longmore books, I binge-watched the whole series.

My favorite of the Longmire books is The Western Star, a story of all the sheriffs in the State of Wyoming taking a drunken train ride from Cheyenne to Evanston. The book was basically retracing the course of all the towns where I lived in my childhood. The part that took place in Evanston was particularly eerie because the train station and railroad yards were right across the street from the hotel my Great Aunt Lue owned.

And I finally read one of the best-selling books by C.J. Box. We graduated from the same high school a few years apart and we have friends and acquaintances in common, which isn't too weird in Wyoming. Everyone knows everyone there. Wolf Pack was a great book to start with and I've downloaded a few more titles to add in 2023.

Reading is the greatest gift my parents gave me. Looking forward to more and more books as I go.