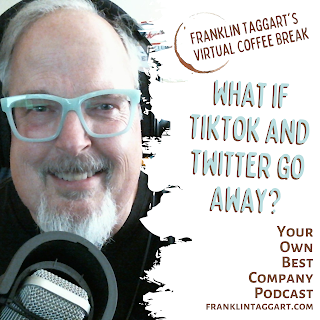 The town where I spent many growing up years had a thriving local mom-and-pop-based business economy when I was young. The big stores back then had outlets in our town, but most of the commerce that happened, took place between people who lived there and whose families owned the businesses.

My Aunt Lue was one of them. Our family helped Aunt Lue run her hotel until after she died, then they sold it to make way for a new post office. WalMart moved into town in the 1990s and Main Street stores were boarded up. Even Sears, Montgomery Wards, and JC Penney are gone now.

Every business has a lifespan and that includes social media platforms with all the rest. We've seen platforms like MySpace, Friendster, Google+, and others last a few years and then get replaced by something else that works better.

The featured video on the end screen is the interview I did with Yifat Cohen where she tells the story of growing a community of 100,000 followers on Google+ only to have Google pull the plug on the platform. When Facebook replaced MySpace, I suddenly lost the place where I could easily reach 1500 fans of my music as they scattered to Facebook, Twitter, and later Instagram, and Pinterest. Now they're all on TikTok.

Yifat suggested that our priority needs to be bringing people from our social media activities into communities that we own and manage. Email lists are one simple solution that has worked since before social media existed.

TikTok and Twitter both seem kind of precarious right now. The only thing to worry about is whether or not they take your community with them when they go. It doesn't have to be that way.