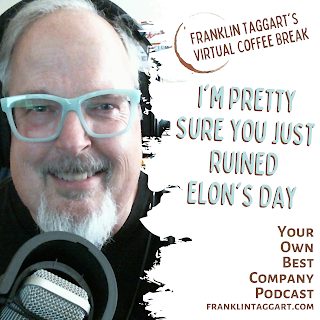 Lots of friends publicly announced on Facebook today that they've deleted their Twitter accounts in response to the news that Elon Musk has raised the money to buy it. I seriously doubt that any of them have tweeted anything since 2009, but those accounts will surely be missed.

I'd like to see what he does with it before I make a decision one way or another. I was more active on Twitter in my early days there, but have let it sit for the past several years, much as I have most social media. I don't like the way it makes me feel so I'm not interested in giving any more time to it than necessary. So I'm going to wait to ruin Elon's day until he gives me a good reason.

I do think it's funny that these folks are making their bold announcements on Facebook.

I'm willing to wait because the guy has been known to have some brilliant ideas. PayPal, Tesla, and SpaceX - are the most well-known among many. He could really have an idea for something that will be worth paying attention to.

And how many people are leaving just to put the screws to the billionaire? As if! He's going to be horribly rich no matter what we all do. And I'm willing to bet those who are leaving are the only side of this experiencing any discomfort. He slept his full six hours and nine minutes and woke rested.

So why don't you do something else instead? Paint something, sing something, build something, help the old lady across the street. Let Elon do what Elon does, and just find your own way to enjoy the time you have here. It will come to an end, and I'm convinced you won't be thinking about leaving Twitter when your life is reaching its end. There's more and better stuff to live for.

Did you know Elon Musk times his bathroom visits? Support Your Local Artists Surround Yourself with Things You Love Tech Billionaires Shrivel At Our Brave Activism
Location: Loveland, CO, USA