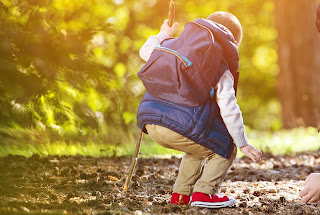 A young boy loved stones, and had a burgeoning collection. On hikes with his dad he would fill his pockets and backpack until they were brimming with rocks of every shape and size. He loved collecting rocks so much that he asked his mother to sew him a special outfit just for rock collecting. He asked her to make him a pair of pants with six pockets on each leg, and a shirt with four pockets on each sleeve and three on each side of his buttons.

When his mother had finished her sewing, he immediately put on his new togs and ran to the door, slamming it in haste. He sped to the trail behind their house, and began to find every rock that he could, slipping them one by one into each of his many pockets. When all of his pockets were completely filled, he opened his back pack and began to stuff it, too. Gradually his load became heavy to the point that he had to stumble beneath the weight.

He decided to take the shortcut home, so that he would be able to take his new additions for his collection. He was making slow and steady progress, but he'd forgotten that the shortcut required him to cross the creek. When he arrived at the creekside, he walked for several paces in each direction along the bank to find the most shallow passage where he could cross. When he found it, he started in.

On most days the boy would have been able to bound across in two steps, but that wasn't to happen this time. The weight of the stones pulled him down, and the rocks beneath the water felt many times slipperier than usual. He tired quickly and had no choice but to sit down. He wasn't in danger of drowning, but the water was cold, and the sun was slipping quickly behind the trees. He shivered.

He tried every possible way that he could think of to lift himself up, but the water soaked clothes just became heavier by the moment. He thought about emptying his pockets, but the coldness of the water was making his teeth chatter, and he abandoned that idea quickly. As a last resort he slipped his backpack off his shoulders, and he unbuttoned and removed his shirt and pants, and then easily made his way out of the water and back onto the trail. He ran home.

His mother met her almost naked son at the back door and seeing that he was shivering, went to the cedar chest at the foot of her bed to retrieve her heaviest wool blanket. Placing the warm blanket over her crying son's shoulders, she tried to soothe him. "We can go pull your backpack and clothes out of the creek, and I'm sure your stones are fine, but I want to tell you something. The earth is made of stones, and you will never be able to collect them all, and the special ones are only so because you decide they are."

In his own way he understood, and from that day on, he would leave the stones where he found them as he went along his way.

On our path, we find a collection of many things: beliefs, opinions, traditions, preferences, emotions, relationships, desires, and so much more. We cling to these "treasures" in order to give ourselves a temporary and shifting sense of security, approval, and control, not realizing that they become burdensome as they draw our attention away from our true nature.

While it may seem daunting to reverse years, maybe lifetimes of collecting, the good news is that with a little bit of inquiry, and a little bit of will, that these weights can be released, stone by stone. At some point, after some momentum has been gained, there will be a wave of grace that will carry you the rest of the way.

As any thought, desire, or emotion becomes present in your awareness, simply ask, "could I let this go?" It may leave before you finish asking the question. Often these patterns are just waiting to be noticed so that they can go on their way. If the construct seems to large to move, it's good to ask "I'd like to become aware of how I have contributed to the creation of this limitation." Wait for an answer, or if none comes, just let go of the question and any answer that may follow.

Your freedom is within your own being, and you are only distracted.
freedom Lester Levenson letting go release technique sedona method transformation well being