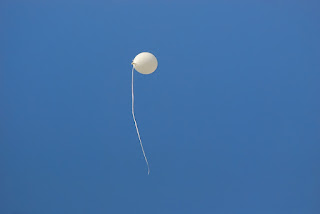 For their wedding, a couple decided to ignore the environmental concerns of the day, and have their guests release helium balloons as the couple was leaving in their limousine for the delights of their honeymoon. Each balloon was tied to a small bag of rice that weighted it just enough to keep from following it's natural inclination to rise and float away. The rice was thrown toward the couple as they left the church, as tradition dictates, and then all of the guests released their balloons as the limo departed. They each then went their own way and left the church.
One lone balloon was left behind. Naturally it strained against the weight of the rice bag, but to no avail. The weight was too heavy, and the helium was beginning to lose its buoyancy as the balloon began to sag.
Just then a small bird flew into the church driveway, and it spied the small bag of rice. Being hungry, it began to peck at the rice bag, repeatedly working its beak into the small lace package until finally one grain of rice fell to the ground. The bird quickly ingested the grain and went back to its pecking. Grain by grain, the bird worked to feed itself, and with each round of pecking and eating, the balloon began to rise until the rice bag was completely empty and it fell to the ground.
The balloon lifted above the church, and beyond the power lines, over the town and toward the mountains west of town. It traveled as far as the breezes would take it until the helium was spent, and it floated to the ground.
When we're faced with heavy thoughts and emotions, it's easy to become overwhelmed by them. Our being is meant to soar, but in the process of living we often lose sight of that, and we take on the weight of beliefs and emotions that keep us from realizing our inherent nature. Letting go of all of that weight at once, while it is possible, doesn't often happen. But through small choices to let go of the smaller components of the weight, we can reach a point where the remaining ballast falls away and we can soar.
Consciousness freedom release resistance Thought