The Gift of Self Doubt 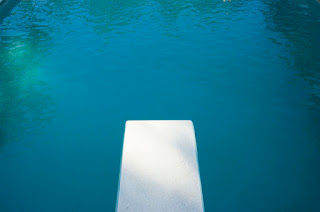 "C'mon kid...JUMP!" the kids behind me on the diving board shouted. As their pleas became more urgent and demanding, I looked over the edge and trembled, partly because I was cold and wet, and partly because of the terror I was feeling in that moment. At 6 years old I was already a pretty good swimmer. I'd taken two summers worth of lessons, and I could easily get from one end of the pool to the other, but this was the latest in a growing string of false starts in my quest for conquering the diving board.

I was the last of my group of friends to accomplish this particular rite of summertime passage. It wasn't for lack of desire; I'd wanted to jump off the diving board since at least the Summer before, and I'd been thinking about it almost to the point of obsession throughout the present Summer, which was nearing its end.

I'd come close to jumping twice before this time, and I'd gotten as close as the end of the board before running back to the landward end, nearly tripping on the top stair on my way back down to the concrete surface. But this time I knew I had to do it. Time was running out, and I was not going to let the age of seven arrive before I made this dream a reality. Even with this realization, I still wasn't sure I could do this. My fantasy was ready, but my mind and body didn't seem to notice, or care.

I looked back over my shoulder and it looked like maybe 25 kids had lined up behind me, and they were starting to get louder and more insistent. The lifeguard blew her whistle and pointed at me, then gave another short whistle as she pointed her other hand at the water in front of me. My dad was watching, too, holding onto the side of the pool exactly even with the place I'd enter the water once I would jump.

Finally the desire to jump won out over the desire to be safe. For a long second I enjoyed the sense of being airborne, and the adrenaline rush was maybe the finest flash of emotion I'd ever felt. The water was cold for an instant, and in my rush to complete my mission I'd forgotten to hold my nostrils shut, so my sinuses instantly filled with the stinging mix of chlorine, water, and God knows what else.

It seemed like I was deeper in the water than I'd ever been before, and as my ears popped with the unfamiliar change in pressure, I started to kick my feet anxiously, and worked my arms back and forth with more than a mild fury. As I reached the surface and my head broke the plane between water and air, I saw that my dad had swum out to where I was. He reached his hand out, but I refused his help and started pulling my own self over to the side.

When I got there I had the most amazing sense of being. Equal parts brave explorer and world conquering hero, and now a member of a not so secret society of those who had found the stuffing to get past their inner obstacles in order to live much more fully. I had done something that I had up until then wondered if I'd ever do. Where I'd backed out of the opportunity those times before, today I'd faced it and jumped anyway, and had vanquished any related self doubt in the process.

For the rest of that day, and for the rest of that Summer and every remaining Summer of my childhood, I would jump off the diving board again and again and again, even graduating to the medium and high dive boards in the Summers to come. The worrisome thinking that had kept me from jumping so many times before wasn't even a whisper after the first success, and the line between dreaming and doing had vanished.

Self doubt has been a frequent companion. I don't know how many edges I've stepped up to, driven by desire, fueled by imagination, only to be presented with that familiar feeling of contraction that tenses my body from my tailbone to my throat. In some situations it showed up even after an initial success or satisfaction. Back when I was dating I found it more difficult to ask for the second date, especially if the first date had been a good one. There have been business opportunities delayed, if not lost because after a positive first contact, I've started to second guess that outcome, then gone on to sabotage any possibility beyond that. It's only lately that I've started to see my self doubt as having any silver linings, but I've started to look past my knee jerk reaction of shame and loathing to see that there is a silver lining to be found.

The first thing I'm learning to see that is revealed by my self doubt is that I tend to doubt myself most often when something important is at stake. Just like that first dive, there is something inherent in my doubting situations that I want, or something that I value. If I don't care about something, it's often either very easy to attain, or it's not worth the pursuit in the first place.

In periods of self doubt I begin to see my limits instead of my strengths, but I'm beginning to see this as more of a distraction than anything of substance. I won't know my real strengths in this situation until I actually take the leap. Self doubt is just an early stage in the development of new capabilities and possibilities.

Self doubt is also a reminder to me that I'll never know everything. With consciousness being an infinite field of exploration, there will always be another vista ahead of the one I've just reached. Even the best maps can't show me what it's like to take the trip, but once I start driving, my understanding of the demands and delights of the journey make the move from my imagination to my experience.

Finally, self doubt brings me squarely into the present moment. It opens me to a process of inquiry in which I can really evaluate my desires, my commitments, and my perceptions. From this place of presence and inquiry I can become responsive instead of reactionary, grounded and centered instead of frenetic.

I'm sure there's more to find here. I want to encourage you to see that your own self doubt isn't as much of a problem as you might think. While it comes and goes, it doesn't have to keep you from the life you really want. Once you leave the diving board it will be gone.