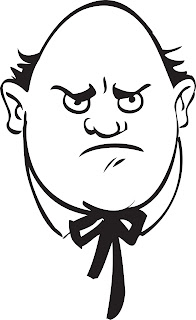 A couple of months ago I took my aging Dad to the DMV office to get a new state ID. He uses a walker now, and I'd gone to the door to hold it open for him. He was still quite a way from the door, and another man was coming up the walk at the same time. I motioned for the fellow to come on in since Dad was moving slowly. So the man went ahead and went to the desk where you get your number before going to the waiting area. He received his number and sat down.

Dad made it to the number station, and I went to find a couple of seats, knowing that he usually wants to sit close to the counter. I found two seats together at the end of a back row of seats directly in front of him. The row was too narrow for the walker to fit through, but Dad started to push his way through, shoving chairs aside as he went. I had pointed out to him that since this was the back row, there was plenty of space behind the chairs to walk without obstacles, but he insisted on pushing through the narrow aisle.

I forgot to mention that there were people sitting in the row in front of the one we were going to sit in. The design of the chairs was a bit odd in that they had backs that reclined slightly. There was a guy in the front row who was working on a laptop, and he was resting all the way back in his chair as my dad walked by. He looked like he was pretty absorbed in his work, so he didn't notice the shuffling and shoving that was going on behind him. Dad continued to bulldoze his way down the row until he finally got to the end seat and sat down.

Scowling, he started in "I should have whacked that son of a bitch in the head."

"Well he should have."

Not long after we'd sat down, the first fellow who I'd held the door for got up when his number was called and went to the counter. Next thing out of Dad's mouth was "And I should whack that asshole in the head, too."

"He still should have let me go first."

Our number was finally called and we made our way to the counter. The man who helped us at the counter was helpful, but he was very soft spoken. Dad is hard of hearing, almost to the point of deaf, and he couldn't hear the man's questions. I would have to repeat the questions after he spoke, and Dad grew more and more frustrated. When the man went to give my Dad's paperwork to the woman at the camera desk, Dad said quite loudly "That moron."

We don't see people how they are. We see them through the filters of our state of mind. If you are in a highly resistant, victim state of mind, you'll see everyone else as a persecutor. You'll make them responsible for your life and the way you feel, and they won't be moved in the least by your misery. You'll be the only one suffering.

If you cultivate a state of mind that is peaceful and compassionate, you'll see others with more favor. You'll recognize their gifts, and their contributions, and you'll meet them with gratitude. You'll know that your feelings are your own doing, and you won't be able to place blame on anyone else for your own experience, nor will you be troubled.

No matter what our circumstances, our state of mind can be elevated and expanded. That's the one thing that we do actually have the free will to do. That's not to say that we won't have moments of stress, anger, and anxiety. We're not immune from life, we're in it. But we can shift our attention away from the thinking that is troubling, and we can allow new thinking to arise from a deeper source of wisdom and peace within us.

It's no secret that an early stage of violence is denigration.  We call people derogatory names as a first step in dehumanizing them. The more we do this, the more habitual it becomes, escalating more and more through each cycle of action until we're killing each other. If all you are seeing in your life are assholes, sons of bitches, and morons, I would encourage you to question and challenge your own perceptions and beliefs, not for anyone else's sake but your own.
dehumanizing denigration free will inner peace persecutor rescuer state of mind victim