Nothing To See Here 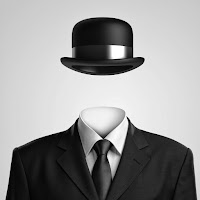 I spent years trying to find myself, know myself, be myself, realize my best self...self, self, self. It almost feels like I spent my growing up years trying on clothes, and forgetting to take the suits off that didn't fit until I was left with a walking closet of layer upon layer of who I thought I was. The weight was unbearable, and carrying all the layers for the years that I did created problems to solve, situations to figure out, relationships to control, dominate or avoid, and the more I thought I knew, the more lost I really felt.
The peeling began in 1998. It wasn't external circumstances that demanded the change, it was completely internal. I had good things, good friends, good work...all the stuff that I thought would make me happy, and I felt miserable and empty. I had carried a deep belief for many years that finding a mate was going to fix the emptiness, so I had been on a quest to find such a one. I felt such an urgency and pressure, and ultimately a lot of pain as relationships started and ended with alarming frequency.
In the next couple of years I spent piles of money on books, workshops, counseling, and coaching to find out how to fix myself so that I could be lovable enough for another to make my life complete. At some point I realized that I was exhausted. I stopped with the searching, and stopped trying to find the perfect match. I was lonely and spent.
Something about that space made it possible for me to start to see all of the layers of persona that I had put on. One by one, each was seen as an unreality...a pretense. Like peeling an onion I went through layer after layer, sorting them out and ultimately tossing them all into the hamper. And just like the onion, when the layers were gone, there was nothing. Emptiness. Vast emptiness. Terrifying emptiness.
Spiritual teachers would do things that would ultimately lead me to stop running from the emptiness, and they would push me to embrace it. One day I had a stark realization. The emptiness is who I am. I am formless being wearing a suit called Franklin. The emptiness has no need. It can't be contained by description, controlled by form, or manipulated by human wiles. It is the source of all there is, and is constantly present, aware, still and stable. It is love, wellness, wisdom, flow, freedom, peace, security, and stability. Those aren't things we'll find outside of ourselves. They are who we always already are.
You are nothing. No thing. I am nothing. No thing. Turn back from whatever path you've devised to avoid the emptiness and let all your concepts of you be absorbed into this nothing. As your pretense fades, and you allow yourself to release into the emptiness at your core, you will be home. You will have the sense within that you've been attempting to fill from without, and it will require no effort.
No thing.
emptiness ending the search Finding yourself layers of persona nothing where's waldo