Unstuck in the Middle With You 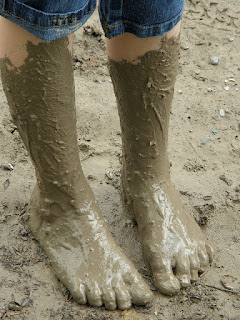 Some friends I know who are recovering from addiction talk a lot about the bottom, the depth of depravity and desperation that they had to reach before they were willing to admit the problem at hand and seek help. I wonder sometimes if for many creators that an equally terrifying place is The Middle.

When I first get an idea that I'm excited about, I can't wait to make it happen. The hyper energized state is fun, and the initial productivity that comes through keeps my focus and consumes time in gluttonous bites. Momentum is effortless, and I'm driven to distraction in any activity that isn't related. It's all I can think about.

This beginning lasts until the inevitable Middle shows up. The Middle is usually heralded by a complication, an interruption, on an unanticipated obstacle. If you've ever encountered barre chords in a guitar lesson, you've met The Middle. Playing a barre chord requires greater hand strength than the open chords that were learned in early lessons. Barre chords are formed by holding down more than one string with one finger, sometimes holding all six strings with one finger. When I taught guitar lessons barre chords were often the stopping place for many students whose frustration overcame their initial interest.

Every endeavor has a Middle. It might show up in the form of a necessary license, or an unexpected sales tax, or just some difficulty that could never have been predicted. It may even just show up as a plot twist in your novel that becomes impossible to resolve. You can tell The Middle has arrived when certain feelings start popping up. Frustration, ambivalence, apathy, maybe even the creative person's most common friends, depression, self doubt, and anxiety appear when The Middle is on the scene.

Here are some possible ways through The Middle:
The Middle is going to show up in every corner of our creative lives. It can be uncomfortable. I think it's intolerable for a good reason; the discomfort moves us either toward commitment, or toward the door. If you're an author with a partially finished book, a painter with a studio full of canvasses that still don't satisfy, or a guitar student struggling to play the perfect F chord, this stage won't last forever. Take small steps and keep moving. You will gather momentum again and reach a finishing point, or you may decide to just focus on something else altogether.

If you're feeling like you've reached The Middle in one of your creative projects, I may be able to help you get through it more quickly and effectively. Request a free initial session here to find out...
Courage creativity getting things finished getting unstuck perseverance The Middle will work