The beginning of 2018 has been full of big and small changes. I have been laying low for a lot of it. I'll get to the reasons in a bit. First thing I want to say is I hope that your year is off to a great start!

Tonight's Alley Lights concert at the Rialto in Loveland has been a big part of my life this year. Last year I attended a breakfast meeting of the Loveland Downtown Business Alliance where I heard a concern on the part of a downtown business owner who was concerned about sending his employees into the alley at night to empty trash because the lighting there was less than adequate. We also found out that alley lighting had not been included in a long term development plan for downtown, so we needed a more immediate solution. I had the idea to put on a benefit concert to raise money for a seed fund for this effort. I mentioned the idea to Jacque Wedding-Scott at the Loveland Downtown Partnership and the Alley Lights Concert was born. My friends Dave Beegle, Wendy Woo, and Steve Manshel were quick to say yes, and the Rialto had the date open, so we're ready for a stellar show! I get to emcee. Buy a ticket and come join us! 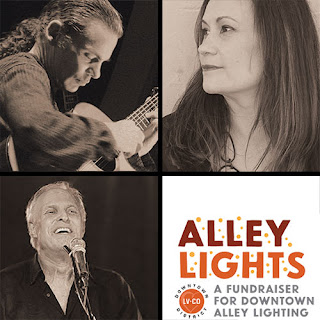 Late last year I was asked by a couple of friends to consider bringing my skills and knowledge to the Loveland Business Development Center. I was a client of theirs several years ago when we first moved to Colorado, and I love what they do. I've completed my certification, and have now started offering basic business consulting there. You can find out more about the myriad of services being offered there, and you can also set up your own registration account if you live in Larimer County and would like to jump in. LOOK HERE

I'll be joining fellow LBDC staffers Mary Ann Huffines, Kathy Stewart, and Lee Porter to present at Made in Loveland Week on Wednesday, April 4. Formerly known as Loveland Startup Week, Made in Loveland Week will be oriented to businesses at every level. We'll be presenting on the range of services that are offered at LBDC, and offering one to one mentoring sessions later that day. You can register to attend here.

I heard a few weeks ago from my longtime musical partner Todd Silas that he and his wife Gretchen will be moving back to Helena, Montana in May. I'll be writing more about this in a future post on my music website, but for now all I can say is that I'm happy that he and Gretchen will be returning to a place that they called home for a lot of years. I know that they'll have much to be happy about there. I'll also say that I'm sad to see the days of Taggart & Silas reach an end. We have only a couple of gigs on the books between now and when they leave, so please come and see us.

I'll be playing with Paul Chet & the Whiskey Chickens at FoCoMX on April 28th at the Whiskey in Fort Collins. You'll need a wristband for the whole festival, but I think you'll love it. They are also looking for volunteers who receive a free wristband in exchange for their work. You can get a $10 discount on your wristbands by ordering by March 31. CHECK IT OUT!

On a personal note, many of you know that I've been taking care of my aging dad for the past few years. He's been in assisted living for about a year and a half. I'm feeling the need to spend some more time with him, so I'll be a little less visible in the coming months.

Lastly, for those who have known me a long time, you'll remember my earlier struggle with Graves Disease. Lately its made a return so the need for self care has risen to the top of my list. I am lucky to have a life partner who is connected to every imaginable healing resource, and I am in really good hands so there's no need for concern. At the same time my stamina has been affected, and I've decided to not schedule any solo performances beyond those I've already scheduled. I'll still be directing music at Unity of Fort Collins, and scratching the strings with Paul Chet & the Whiskey Chickens, so I'm still making music, but I have a strong desire to record all the songs I've written in the past 20 years, and I'd like time to focus on that.

Thanks to everyone for their friendship and support. More news will be coming soon. Until then, love each other better.