The Only Way to Win is Not to Play 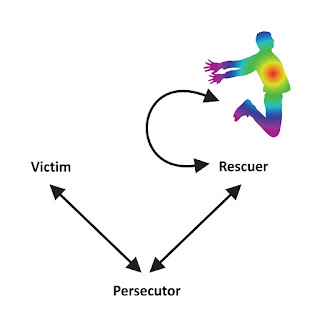 In conflict, I take on one of three roles: Victim, Rescuer, or Persecutor.

In Victim mode, I fixate on the injustice, the wrongdoing, the trigger; pointing my finger at the persecutor, avoiding responsibility for the emotional state that my own fixation is creating.

In Rescuer mode, I step in to  help, overstepping my boundaries, and taking on responsibility for feelings that aren't mine, trying to fix.

In Persecutor mode, I shift into anger; blaming, raging, powering up; heaping shame and contempt upon the Victim.

As the drama unfolds, I dance from role to role, and as I dance the conflict grows, the pain that I'm attempting to avoid grows, and the elephant in my room shits all over the floor.

All of it, every role, all the pain, all the drama are products of my own perceptions. They don't exist in an objective reality. They are purely constructs of my own mind. As long as I'm in the drama, there is no relief.

Like the old movie War Games, where the hacker and the computer engage in a real life game of thermonuclear war, the computer delivers the punch line, "The only way to win is not to play."

To not play the game means that I accept responsibility for my own pain, I let others be responsible for theirs, and I take the elephant outside to do his business.

My pain is my own creation. My own thought and consciousness are in cahoots to bring this reality to mind. Attending to my own pain instead of acting out on it, allows me to become a creator instead of a victim, a healer instead of a rescuer, and a guide instead of a persecutor.