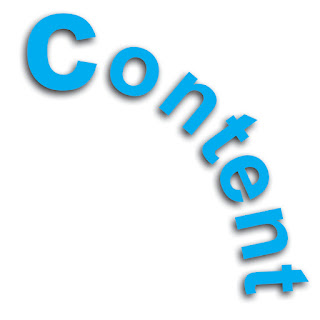 I listened to a podcast the other day in which two women were talking about their success online, which apparently had something to do with something called content. In the course of the 50 or so minutes they were talking, the word "content" was spoken between 5 and ten times a minute. Content, content, content. Creating content, content marketing, content, content, content, more content. This generic term has come to mean less and less, and it leaves a taste in my mouth comparable to that brought about by the generic beer I tried after the high school football game all those years ago. I can still bring the taste to mind, and it isn't a fond memory.

It used to be that people wrote articles, or stories, or songs, or screenplays, or they made films, or wore out their dad's Super 8mm camera, spending their hard earned lawn mowing cash on getting those films developed, then splicing their masterpieces together on the kitchen table with a pair of scissors and Scotch tape. We labored to craft something special- something memorable- something of worth. Now, we create content, and we feed it into the flooding torrent of content, and it's churned out without polish, without care, without thoughtfulness.

As someone who has always been keenly interested in, and who naturally seeks out information, I was initially charmed by the things I could find online. I started my online journey in 1995 when I joined AOL. There were groups and bulletin boards, soon followed by mp3s, then gifs, then videos. Memes, which used to be a perfectly useful social construct that described common value sets that bonded groups of people, turned into a barrage of photos with crude looking words expressing the latest inflammation over, and over, and over again. It was fun. You could find anything. And sooner or later, anything could find you.

At some point someone decided that this "content" could be used as a marketing device. "content is King!" read the banners at the latest ______-Con(fill in the blank). The more content you give away the more stuff you sell. Write a book! Share your music files! Document your minutiae on YouTube, Instagram, Facebook, and Twitter! All this started when you had to actually locate a device to ingest all this content from, and create it with. You had to turn on a computer, wait for it to boot, then check your email, update your MySpace, and download an illegal copy of Dark Side of the Moon on Napster. Now, we carry our boxes in our pockets, some of us on our wrists, or in our eyeglasses. And we ingest constantly.

I'm weary. Weary of the ingestion, weary of the pressure to create, frustrated with the mediocre quality I've come to settle for in both what I take in, and what I put out. As I've been looking outside of this content orgy for some kind of a break, I've realized that content isn't really king at all. Content is what it's always been, a connection tool. We've lost sight of the reason for the existence of content. It's the connection that really matters. And so does white space, and silence, and the innate wisdom that doesn't broadcast from anywhere but within.