July 06, 2015
Charles Paul Taggart died the other day. To the grown ups in my life he was known as Paul. To all my cousins, my sisters and I he was known as Uncle Charlie. He was a larger than life cowboy who'd also been a sailor. Strong as a bull elephant, twinkling eyed, kind, generous and open hearted, he was my boyhood hero.

I can still viscerally feel the anticipation of waiting for him and his family to arrive at gatherings. Back then they lived in Texas and we lived in Evanston, Wyoming where most gatherings took place at the Sims Hotel, owned and operated by our Aunt Lue. Uncle Charlie's son, Shawn is the same age as me and between knowing I was going to see my buddy, and Uncle Charlie and Aunt Joyce I couldn't sit still. He drove a burnt sienna(thanks Crayola) Cadillac that seemed to be about 40 feet long. When we saw that car come down Front Street from the underpass, I'd leap out of my own self with joy. When he spotted us he'd give a couple of pops on the car horn to announce his arrival. We'd crowd on the curb until they got pulled in, commencing the reunion right in the street.

I'm not sure why times with Uncle Charlie enchanted me so. He was a trickster and a teaser. There was something about being in his presence that made me feel bigger, stronger and more tough than I usually felt.  Maybe it was because he gave me nicknames like "Hank" and "Frankie". All I know is that it felt good to be around him and I couldn't get enough. He had a smile that made his whole face radiate, and he would pester us relentlessly until we begged him to stop. I'm sure every one of my cousins has at least a handful of Uncle Charlie stories to tell.


My Dad told me this one: In Evanston there was a fellow named Lyman Brown who ran a gym. Lyman would often bring world class weightlifters to his gym for demos to drum up interest in his business. On occasion the visiting weightlifter would offer up a challenge to any of the locals that if they bested him, they would win a cash prize. Gramps heard about this on one occasion and brought Uncle Charlie out to the gym. The weightlifter put together a bar with his personal best on it and struggled to get it off the ground, but finally succeeded. Uncle Charlie stepped up and grabbed the bar and lifted it easily then tossed the bar several feet in front of him. Lyman reluctantly put the cash in Gramps' hand.

Besides my memories from the Hotel, my most favorite times to recall are the times when I got to spend extended visits with Uncle Charlie, Aunt Joyce and Shawn. One summer I joined them at the LAK ranch in Newcastle, Wyoming for a couple of weeks. Shawn and I rode every day. He rode a beautiful horse named Pepper. I was on a little pony named Stony. I think almost everyone in my family knows my propensity to end up on the ground when I try to ride horses. They knew that I needed one that was closer to the ground.

One day on that trip I saw Uncle Charlie decapitate a rattlesnake with a shovel. He was fearless. The snake was crawling near the barn where Shawn kept his 4-H steer. I think that may have been the first time I had ever seen a rattler up close and in person. I was frozen in panic. Uncle Charlie just stepped right in and took his shovel to the snake and cut him in two, scooped up the still writhing body and head on his shovel and took it away.

That summer Shawn and I got to ride in the fair parade during county fair. I got my first pair of real cowboy boots, a pair of Tony Lama rough outs. I wore those things until my feet wore through the sides and soles. At the end of the visit Uncle Charlie gave me a couple of prized possessions. A pocket knife with the logo of one of the feed companies he patronized, and a real lariat. I was over the moon. I remember after that trip that I'd rope pretty much anything that moved for a while. Poor dog. 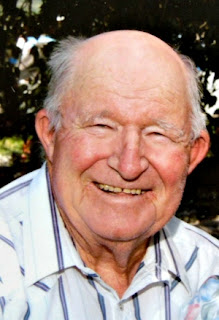 Another visit that I'll always remember was another one that lasted a couple of weeks at the property in Thayne, Wyoming where he ultimately lived out the rest of his life. Back then there were no buildings on the property. It was just forty acres surrounded by dirt roads. He had bought a couple of Kawasaki mini bikes that Shawn and I rode relentlessly over every inch of the property. He'd pitched a huge Army tent that I think might have once belonged to my Gramps. It was one of those huge, heavy cotton canvas tents with no floor, and a flap for a stovepipe to exit. It was one of the most fun and relaxing times I've ever had, and happiest.

I didn't see Uncle Charlie very many times after that trip. We all started to move further and further away. I went to Indiana for college and began a long absence from significant family events. I missed Shawn's wedding and Aunt Lue's funeral, and most every other family gathering for the next thirty years. I did get to see him at a couple of reunions, where he retained his larger than life image, even as he grew older. The last couple of times I saw him were just in the past couple of years. He'd started to be affected by dementia of some kind and didn't remember me. That didn't matter to me so much, because his memory wasn't what made him Uncle Charlie. That presence was still there, maybe faded a couple of shades, but still able to give his trademark twinkly eyed smile as he asked repeatedly "Do you know who I am?"

Yeah, Uncle Charlie, I know who you are. I'll never forget you. 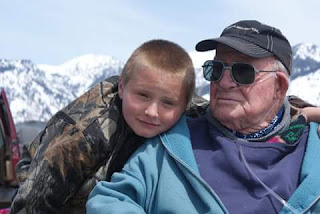 In the mid 90s I wrote a song that was partly inspired by Uncle Charlie. His story is intertwined with those of a couple of other friends of mine who had left the cowboy life behind. His is the story I tell when I sing it. He didn't really wear Stetsons as much as Resistol straw hats, or caps from feed companies. He did teach me how to ride, and you already heard about the rope. "Hard to be a Cowboy" is featured on a fundraising project called Songs for Hearts and Horses. Hearts & Horses is a wonderful non profit therapeutic riding center here in Loveland that provides riding experiences to people with disabilities, veterans returning from service with combat related stress and anxiety, and folks facing other life challenges. They and their horses work miracles every day.  All the proceeds from sales of the album and singles downloads(CDs not available) go to a scholarship program at Hearts & Horses.