Why Isn't My Great Idea Working? 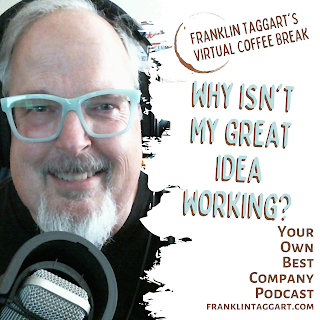 So you took a great idea and created a way to deliver it, then you built an offer around it and announced it to all the circles you could, tweaking your message as you went...and...crickets? Yeah, sometimes that happens, even to the best sales and marketing gurus.

That doesn't specifically mean that your idea wasn't great. It could be that there was something about the package and offer that people didn't get or resonate with. Could be that you weren't reaching the right people. Could be that the timing of your release was in conflict with too many other options targeting similar audiences. Or maybe you haven't landed on the right way to communicate about it.

Sometimes I've faced this and taken a break from it to give myself some space for reflection. I still believe we're given good ideas for a reason. I want to know what needs to shift in order for people to say yes to my offer. Sometimes it helps to get feedback about all these things from someone you trust. I've had some offers I've done that only needed the most minor changes in order to take off. My friends can often see those things better than I can.

Another thing that I've found is that if I find another way to package the idea that it works better. I've offered a ton of live workshops that didn't fly but put the exact same information in online courses and they took off.

And sometimes it's just not the right time for something. I've had several experiences of working hard to develop a product that my market wasn't quite ready for. I'll set it aside in frustration only to find that a year later, everyone wants it.

Today I helped someone find the best video software option for their skill level. If you're looking for this kind of help, get in touch.