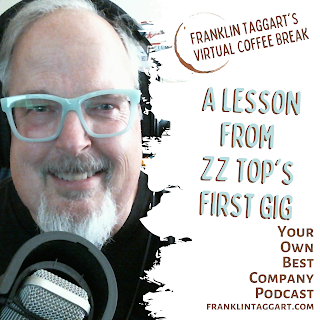 I've loved ZZ Top's music since I bought the 8-Track tape of their Fandango album when I was a freshman in high school. I even loved them when they added the fake drums and synthesizers. Last year, when Dusty Hill died, I felt like I'd lost a personal best friend. So I've watched the Netflix documentary, ZZ Top: Just a Little Ol' Band From Texas, three and a half times, and I'll finish the fourth tonight.

One of the things they talked about in the film was their first gig. This part of the story has stuck with me because it's one thing I have in common with them - I had a first gig, too. And my first gig had the same number of attendees - one. They bought the guy at their show a coke when they took a break so he'd stay for the second half.

Sometimes, our first run at something gets a minimal response even with our best marketing efforts. It's easy to get discouraged when this happens, but it isn't a commentary on the work you're doing or have done. It just takes time to find the people who will love it.

I knew a software developer about 20 years ago who had released a successful musical notation program that was a popular alternative to some of the expensive competitors at the time. He started working on a passion project that had nothing to do with music, and when he launched, he sold zero copies. The music people who had followed him for years had no interest in his new direction, and he hadn't done any work to build the right audience for the product. He was so discouraged he closed his company.

It takes time to find your people, and I can't tell you exactly how much time. I talked with a new YouTuber in a Facebook group this morning who had gotten 4000 followers in less than three months. That hasn't been my YouTube experience, nor have I heard of similar experiences from more than a small handful of people.

The exciting news is that this vlog/podcast has started reaching hundreds of listeners with each episode across all the distribution channels. That feels awesome, and I thank you for your time and attention. If you're doing something you believe in, never give up until the right people find you.