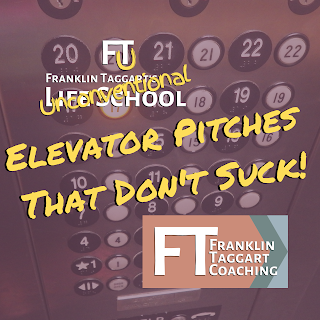 I attend networking meetings every week and I'm amazed to see the change that takes place in people from when you're just having a normal conversation with them and the point where they are asked to introduce themselves to the group. I almost have to do a double-take because the charming person I was just talking with has turned into a robot who is rushing through a canned, formulaic phrase that ends up not giving anyone a reason to talk to them after the intros are done.

I've had my share of elevator faux pas', too, mostly because I never realized just how important they were in the process of creating memories and delivering value. A few years ago, I attended a workshop at the SBDC where we were given an elevator pitch exercise that had a formula that I had to question. It was the most uninteresting way to present yourself that I had ever seen.

About a month later I was putting together a workshop on marketing messages for the same SBDC and I created a short exercise on how to make your elevator pitch open doors for your business. That was the beginning of the material for this course. I've taught this system to a few hundred people since then and they all come back saying that their networking has been revitalized by this one simple process.

Now you can learn the same things these people did and turn your elevator pitch into a magic "Open Sesame" that will create opportunities for you at every turn. Watch this to learn more: