Creative Middle Class Where Art Thou? 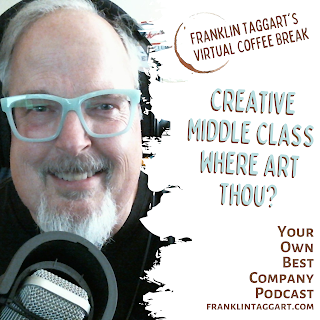 In 1989 I worked for a sheet music distributor. I remember being very excited at the time as new equipment was being introduced that would allow us to have our customers call a toll-free number and listen to 15-second samples of new music we were offering and then select a digit at the end of the call where I or one of my sales comrades would take their order.

Up until then, we had been making cassette tapes and sending them by mail with one free sample of every new piece of music, then following up with sales calls. The new system was making all of that easier and would easily pay for itself after just a few months of use. The price tag? $25,000.

Only a few years later, that system would be made obsolete by new modems that allowed computers to connect with each other through the World Wide Web and the whole process could be automated, including the order taking. The sales force that was once required was no longer necessary. Two customer service reps divided the country between them and handled any needs not addressed by the automated system.

Creative industries have experienced similar upheaval. The ways we've traditionally sold our goods have largely gone away and have been replaced with a crowded marketplace where noise tends to rule and quality gets buried in a sea of mediocrity.

We're in a predicament that is going to take our collective ingenuity to find a way through. Again, I have very few answers here, but the questions themselves need to be asked. Tell me what you think.