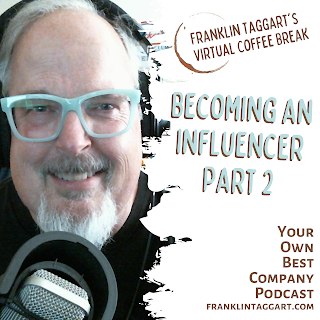 In yesterday's Coffee Break, I was spouting off about the idea of becoming an influencer being a goal. I have no problem with someone pursuing that dream, but if that's their only focus, that alone won't be enough to sustain a business. If they hit the jackpot and make big cash for a little while, I'm not going to say anything negative about it. I believe in luck, as much as I do work.

The part I left out yesterday was the crucial role of community in the process of becoming an influencer. For clarification's sake, I want to say that I'm using the word influencer to identify a person who gets paid to influence their community to buy things or join things. I seriously believe that every human being has their own natural way of influencing, but I'm not talking about that here.

Some of the online influencers I admire a lot are John and Hank Green. They didn't set out to become influential. They just found an interesting way to communicate with each other through a then-new medium called YouTube. Vlog Brothers gradually drew an audience as they shared things that were interesting to them and personal things going on and as the community grew, it developed an identity of its own - Nerdfighteria. It was an effect of their commitment to communicate on YouTube, but it wasn't an original goal.

If you want to become an influencer, you'll have to make a commitment to creating experiences for people that they enjoy, benefit from, and want to have repeatedly. As more people discover you and your channels, there may be an opportunity to form. As you nurture that community and continue to find great ways to serve them through your creativity, your influence will grow and you may have the ability to make your influence an income stream.

Check out the Coffee Break for more.

Tuesdays are my busiest days but one of the activities from today that stood out was introducing a person who wants to start a social media management business to some of my favorite tools. The first one I showed her was Canva. I use Canva every day and have not had to use any of my expensive illustration and photo processing apps for a long time. Do you use Canva?

Bein' a dang ol' influencer Canva Give people experiences to remember and repeat Late on a Tuesday The only shortcut is the long way
Location: Loveland, CO, USA