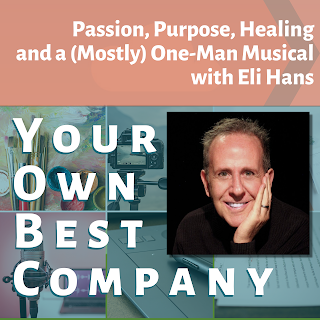 Eli Hans is a multi-passionate Renaissance man, having worked on his own for thirty-five years, reinventing his career several times, in television, special events production, as a voiceover actor, interior designer, life and business coach, holistic cancer coach, and his latest iteration as the writer and performer of his mostly one-man show: Out of The Blue, a Miraculous Musical.

In 2009, he and his husband Joseph Bennett exited the American rat race by moving to an artistic ex-pat community in Mexico called San Miguel de Allende. Eight years ago, though flourishing in their new lives, Eli was diagnosed with a rare and aggressive type of cancer. That's when everything changed.

Having about a 10% chance of survival, Eli focused 100% of his energy on his successful recovery. Confronting his mortality helped him realign his goals and for the past 6 years, he's been supporting others to discover their passions to create meaningful work, using their natural abilities to make a difference in the world, while making a great living at it.

For the past year and a half, he has been developing his one-man show about his cancer healing journey, hoping to inspire others to tune in to their intuitive guidance as they face challenges in their lives.