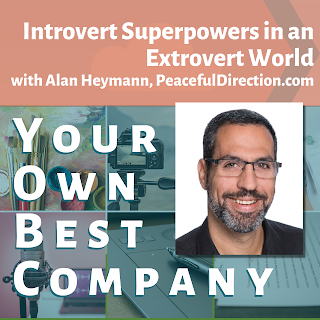 Alan Heymann has a knack for coaching fellow introverts, helping them find their superpowers in an extroverted world. Alan also specializes in coaching through transitions — such as the transition from individual contributor to leader, the transition into a larger and more complex role, or the transition into a different career. He brings a warm, open and energetic presence to his coaching clients. To date, Alan has coached leaders who were born in 19 countries and work on 5 continents.

Alan is the author of the book Don’t Just Have the Soup: 52 Analogies for Leadership, Coaching and Life. An expert communicator and engaging speaker, Alan spent more than two decades in public, government and nonprofit communications -- leading teams from 2 to more than 100 people who use words and images to inspire positive change in society. Inspired by a career transformation he brought about with the support of an executive coach; Alan decided to become a coach himself. He founded Peaceful Direction in April 2019.

Alan was previously Vice President of Communications for The Humane Society of the United States. He also held various roles in the Government of the District of Columbia, including agency public information officer, mayoral speechwriter and legislative staffer. Earlier in his career, Alan was a television reporter, producer and anchor in his native Illinois.

Find more information about Alan and his coaching services at https://peacefuldirection.com

And look for his book at http://thesoupbook.com

Your Own Best Company is a podcast produced and hosted by Franklin Taggart. While intended to serve an audience of people who love working alone, the show’s guests reach into many business and life arenas. Your subscriptions, reviews, shares, and comments are appreciated!